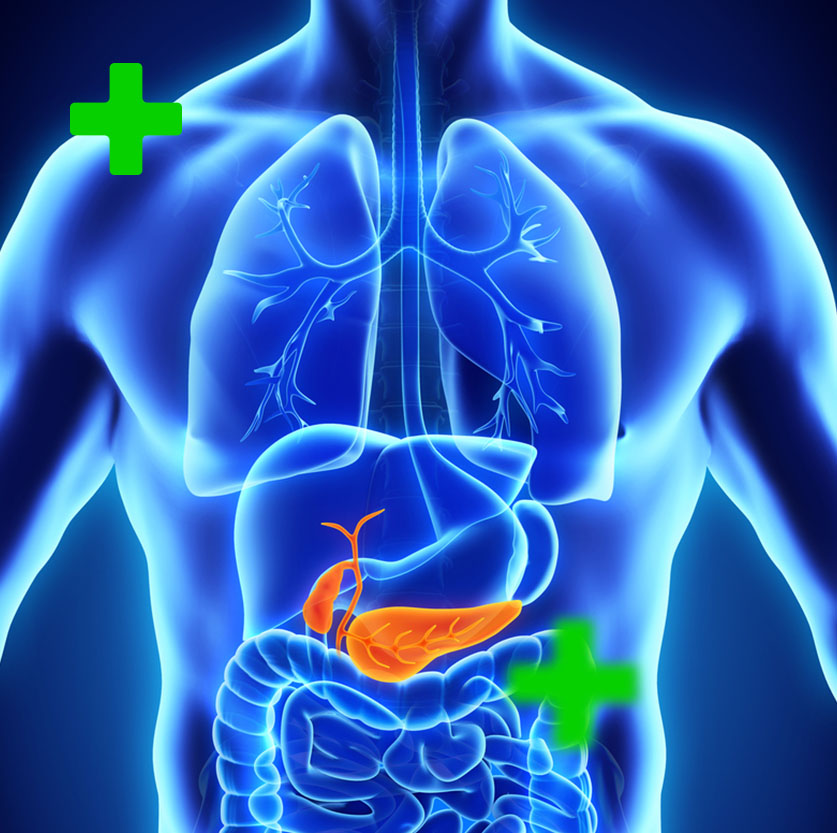 The pancreas is an organ which is about 6 inches long and is located in the abdomen, surrounded closely by the liver and the small intestine. It has two important roles in the body. The first is to secrete vital hormones and secondly, to secrete the necessary amount of digestive juices into the digestive tract to facilitate proper digestion.

Diving deeper into ​its functionalities​, this organ is a part of two systems in the body, which are the endocrine system and the exocrine system. In the endocrine system, it regulates the amount of glucose in the blood by releasing two hormones namely insulin and glucagon. Balancing the blood sugar is significant in the smooth functioning of the liver, kidneys and most importantly, the brain. Under the exocrine system, the enzymes released by a pancreas work by bile from the liver and gallbladder to help in the digestion of fats, carbohydrates and proteins. These nutrients are essential for the growth, repair as well as sustenance of the body.

The pancreas has a vital role to play in the endocrine as well as exocrine mechanisms. Several ailments affect the pancreas in the course of life. Among them are Pancreatic cancer, Pancreatitis and Diabetes mellitus. An elaboration of these is as the following:
Pancreatitis​ : It is the inflammation of the pancreas in which the secreted enzymes abnormally start reacting inside the pancreas itself before reaching the duodenum. This mostly takes place when the pancreatic duct is blocked by gallstones or due to the tendency of drinking excessive alcohol. It can last for a few days but can also escalate into a chronic condition which can last for years, with symptoms being abdominal pain, fever and nausea.

Pancreatic cancer ​: This is caused when cancerous cells damage it. It is a tricky ailment to detect as the pancreas is surrounded by a couple of other organs, hence it becomes difficult for a physician to foretell its onset through normal physical examination. Also, if the cancer cells manifest on any neighbouring organ like the liver or duodenum, then there’s a high chance of them invading into the pancreas and infecting it simultaneously.

Diabetes Mellitus​ : Apart from these ailments, the most common ailment affecting people around the world is Diabetes mellitus. As of 2019, India alone had a total count of ​72.96 million cases​ in the adult population, and the number just seems to be growing. The pancreas secretes insulin to lower the blood sugar level and also facilitates the digestion of food through the secretion of enzymes like chymotrypsin and amylase. Insulin helps in digesting the sugar and supplying the body with energy subsequently.

The onset of Diabetes points towards the dysfunction of the pancreas. Many of our patients suffering from Diabetes have admitted to being troubled with persistent chronic indigestion in the past. These phases of indigestion are an indication given out by the pancreas about its gradual degradation. Such instances should not be ignored and treated timely to delay or prevent the onset of diabetes while also keeping the pancreas in good health.
There are 3 types of diabetes which lead to most of the cases reported every year. namely Type 1 Diabetes, Type 2 Diabetes and Gestational Diabetes.

Most medicinal theories describe Type 1 Diabetes as an auto-immune disease. According to our research, we speculate that it happens due to the disintegration of the link between the brain and the pancreas, as there weren’t any evident signs of the degradation of pancreatic tissues. We have also observed in the reported cases, that its onset is mostly aftermath of a critical brain fever, which we suppose damages the communication between the brain and the gland, as it stops producing sufficient insulin after 2 or 3 months of the fever. The possibility of recovery reduces in cases of delayed medical help while opting for treatment in initial stages has positive outcomes. Zyropathy prescribes the necessary supplements to such patients and complete recovery is anticipated within 3 months, if the patient does not recover within 3 months of supplementation then treatment is stopped because of low possibility of recovery.

Type 2 Diabetes occurs due to the degradation of the pancreatic cells with time, which affects the quantity of insulin being produced. Another reason which we believe is the deficiency of certain nutrients required to produce sufficient insulin. This affects the quality of the insulin produced. We at Zyropathy treat such patients with our supplements for 2 months and monitor HbA1c (average sugar for three months) level before starting supplements and thereafter at an interval of 30 days. If the results obtained are found progressively improving, then this is an indication of the recovery of the pancreas. As the patient starts showing signs of recovery we progressively reduce the medication, gradually removing the dietary restrictions. After about three months, the patient can return to a healthier life without diabetes.

The third type is Gestational Diabetes which affects pregnant women and ceases to exist in the body after 8 or 9 months of pregnancy. But, on the contrary, if it does not get cured naturally then it’s difficult to cure it. Although, in some cases, we subjected the patient to the same treatment and received some positive results.

Lastly, we would suggest patients of chronic indigestion to never ignore the symptoms and seek immediate medical help for prevention of diabetes in the longer run. Indigestion not just points towards the problems of the liver but may also indicate a looming threat of the inflammation of the pancreas or the distant onset of diabetes.

“PREVENTIKA” is a unique combination of six potent herbs that protect your body from 18 major ailments including Cancer.